Customer Reviews
The seller responds to the information in a timely manner, the product quality is good, and the price is right

Hydraulic rock drill is a kind of rock drilling construction sharp tool, with impact, rotary, propulsion and washing and other functions, used for hole or bolt hole construction.

１ Rock drill composition
Domestic rock drilling rig manufacturers use hydraulic rock drills for drilling construction. Their rock drills are high-pressure small-flow or low-pressure large-flow percussive rock drills, which consist of the impact part, the middle part, the hydraulic stop part and the front part (see Figure 1). The impact part has a high-pressure zone and a low-pressure zone. The middle part of the rock drill is mainly a centering and centralizing part. The hydraulic stop part has the functions of turning and hitting parts. The front part of the rock drill mainly provides centralizing support for the rotating impact of the shank.

2 Classification and solution of common faults
2.1 Slewing Problems
2.1.1 Rock drill rotary stuck
(1) The spool of the logical sequence valve of the rotary oil inlet of the drill is blocked due to hydraulic oil pollution, which will cause the rotary oil inlet to be blocked and stuck, as shown in Figure 2 (a). The solution to this problem is to remove the spool and clean it with diesel oil. 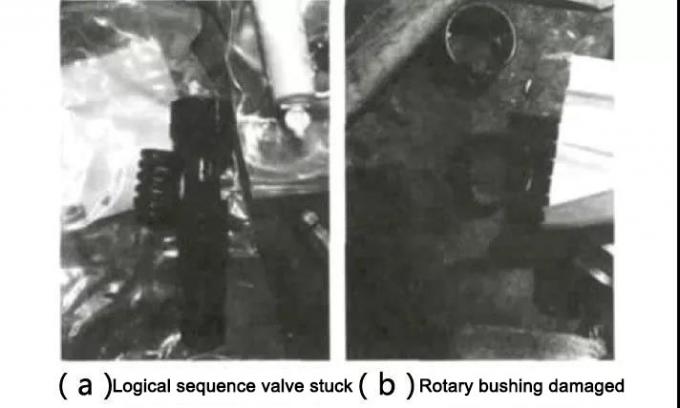 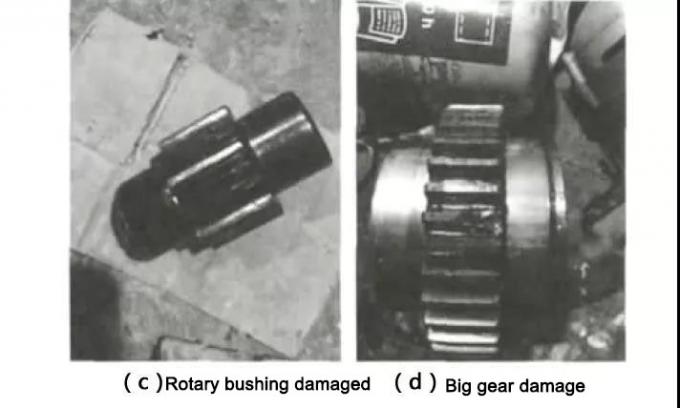 (2) The rotary parts of the drill are damaged, such as rotary bearing and gear, as shown in Fig.2 (b), (c) and (d).
Failure of components is usually caused by insufficient lubrication or fatigue.
Sufficient lubrication is a necessary condition for rotary bushing to maintain good performance. Lubrication requirements should be timely improved for high propulsion force and large hole diameter.
Inadequate lubrication can cause high-temperature discoloration around the end face of the bushing and, in severe cases, can cause the rotating bushing to break in two and even cause costly secondary damage to the drill.
Rotary bushings are wear-resistant parts and should generally be replaced after 400 impact hours of operation to prevent damage due to part fatigue.

2.1.2 Return the drill half turn
The rock drill stops rotating after turning part of the Angle, and a similar phenomenon occurs in the reverse rotation. The reason for this phenomenon is that the rock drill is stuck in rotation due to inconsistent torque of the fixing bolts of the rock drill body.

2.2 Impact Problems
2.2.1 The rock drilling is weak and the drilling efficiency decreases
The rock drill is weak and its efficiency decreases, which is mainly manifested as serious jitter of the impact pressure gauge on the cab panel and tubing of propeller boom. The main reason is insufficient nitrogen in the high-pressure or low-pressure nitrogen zone of the rock drill or damage of nitrogen diaphragm, which needs to be replaced or filled with nitrogen, as shown in FIG. 3.
When such faults are serious, the accumulator end cover may crack, resulting in nitrogen leakage. 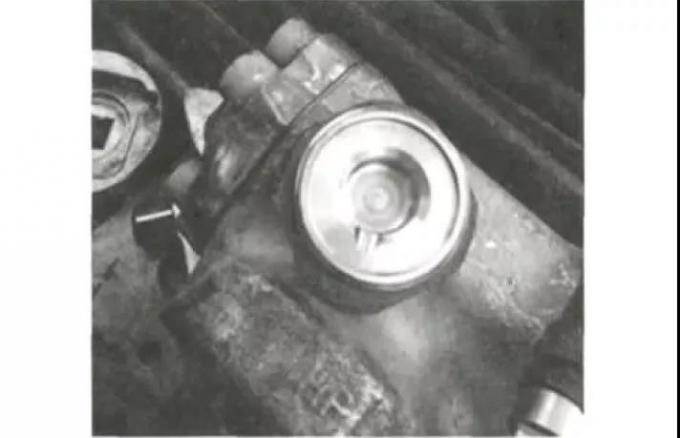 2.2.2 Rock drilling without impact
The rock drilling rotation is normal and the impact pressure gauge is normal, but there is no impact. The reasons are as follows:

(1) The impact stop valve of the rear cover of the drill is stuck due to hydraulic oil pollution, and can be used after cleaning, as shown in FIG. 4 (a). 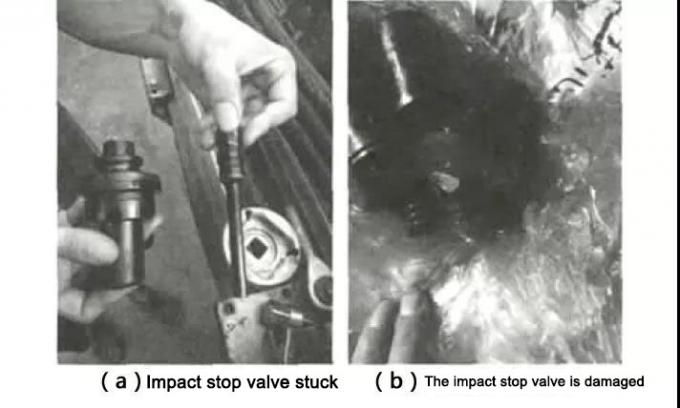 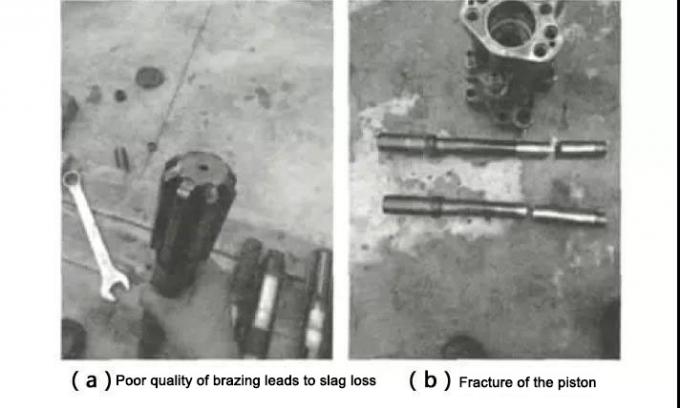 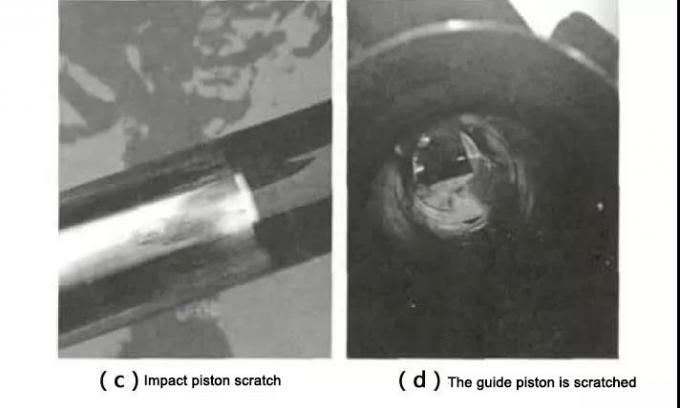 2.2.4 Rock drilling is difficult to find holes with low impact and almost no advance
The main reason for the difficulty in drilling with low punch and almost no advance is the damage of the drill tail ring, as shown in FIG. 6 (a) and (b), which leads to the difficulty in opening holes.
If the brazing tail ring is damaged too frequently, it is because the clearance is large due to high low punching pressure and serious wear of copper sleeve, as shown in FIG. 6 (c) and (d), the brazing tail is not in alignment. At this time, it is necessary to measure and check the size of copper sleeve for verification and replacement.

2.3 Waterway problems
2.3.1 The washing head of the drill is broken
The main reason for the water leakage caused by the rupture of the washing head is that the backbeat or impact is carried out in the absence of propulsion.
Two other reasons are as follows:

(1) The washing head is corroded.
This is because the material used to make the wash head cannot be fully strong and corrosion-resistant.
If the wash water used is acid-base corrosive, the wash head material may become corroded, which can cause cracks (see Figure 7 (a)) and eventually fatigue failure.
The only way to improve this situation is to keep the brazing tail, flush head seal and connection plate in good condition. 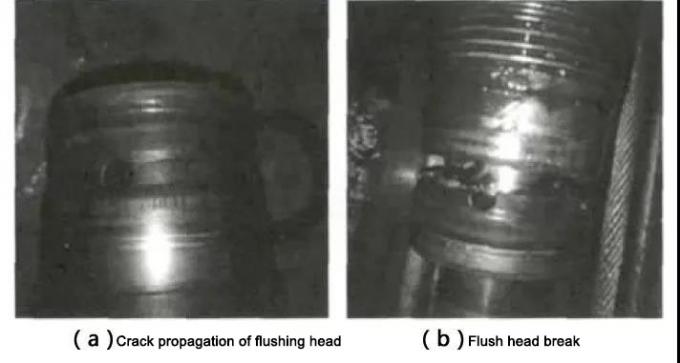 ▲ Figure 7 Rock drill washing head fracture
(2) Front end is corroded.
If the front end is corroded, the flush head will move forward and the impact force from the stop ring will be transmitted to the connection plate rather than to the connection thread of the front end bolt as expected, which will result in an adverse stress distribution around the opening at the front end of the connection plate, resulting in a rupture (see Figure 7 (b)).
Brazing tail, water sealing ring and connecting plate are in good condition to effectively avoid front-end corrosion.
In the actual drilling operation, try to eliminate the use of impact in the case of low propulsion or no propulsion force, especially high impact, which is also one of the effective measures to improve the service life of the washing head.

(2) reduce air strike, reverse strike, eliminate the total impact, in the actual drilling operation as far as possible to eliminate the use of impact in the case of low propulsion or no propulsion force, can not use high impact.

(4) Check the damaged tightening force of side bolts and rear cover bolts regularly.